Master of Avoiding the Question

Winter4 would make an excellent politician or college football coach in a press conference. He is the master of question avoidance.

Winter4 has been all about dressing himself for the past couple of weeks. This occasionally results in him choosing his shirt and Fall2's pants which look like shorts on him. This morning he put on green pants (backwards, you'd think he'd get it right 50% of the time, but no) and a green shirt (two greens together don't necessarily match, by the way).

Right before lunch, Winter4 appeared in the kitchen wearing a red shirt meaning a. he felt like changing or b. he made a huge mess and was trying to cover it up. Here's our conversation...

Winter4: "I change into a red shirt. Like The Incredibles. Like Dash. I want to be Dash."

Mom: "What happened to your green shirt?"

Mom: "Yes, but where is your green shirt?"

Winter4: "Green shirt?" [As if such a thing never existed] "I want to eat cereal. I love cereal and milk."

See his tactic? Kinda/sorta answer the question and move on. If changing the subject doesn't work, he runs away which is an equally effective way of avoiding the question. 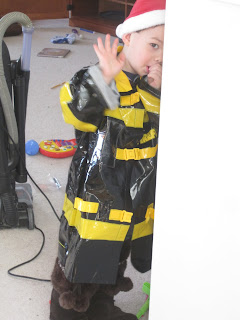