I worked out of the home as a Speech and Language Pathologist until Spring7 was born. Often, I'd have early meetings so my husband was on duty in the morning, getting Summer10 up and ready for the babysitter's. It was a relief to leave the house and not worry about dropping off the little man in the morning plus it gave "the guys" some special time together.

We're a family who thrives on the familiar so the two guys had a set routine in the morning. Part of the routine involved having Summer10 pick out one special stuffed animal to bring downstairs. We limited it to one special animal because Summer10 slept with a zoo of animals in his bed that allowed just enough space for his little body. Something to know about my oldest son is that he's not a very good decision maker and choosing one stuffed animal became increasingly difficult. Finally, came the morning when Summer10 stood up on his bed and said with a sweeping arm and all the authority of Charlton Heston, "All animals". Well, that didn't get very far but it gave us a good laugh.

Enter Winter3 at about the same age. My husband and Winter3 have a special bedtime routine (we love those routines!). They snuggle on a bed and tell stories...two stories per night. My husband is a great storyteller and lets Winter3 help him. They have a bunch of stories they've come up with and rotate through them including stories about a goat, Blues Clues, a little boy named Winter3, a monster named Henry (that one stopped when Winter3 thought Henry had moved into his closet) and so on.

As it happens, Winter3 isn't much of a decision maker himself. He's finding it increasingly difficult to choose only two stories each night. Out of the blue, with a glint in his eye but no authority in his voice he said, "All stories!" He giggled because he knew that was just a crazy idea. The next night he said, "All stories! Dat's funny!"

By the way, neither one got their wish!
Posted by Steph at 12:01 AM No comments: 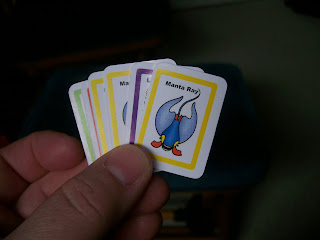 This afternoon, Spring7 asked me to play Go Fish with him. Sure! I said, but this is not what I expected. Perhaps something, um, a little bigger? Who thought these were a good idea? 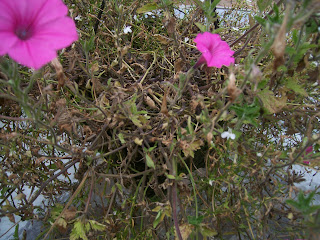 A few flowers and whole bunch of dead ugly mess is all that's left of my (first) hanging basket of the season. Honestly, I have a good track record when it comes to keeping things alive. Dependent on me are four children, one hermit crab, two goldfish, a vegetable garden, a flower garden and two houseplants. The goldfish and hermit crab are both more than two years old and who knew that was possible?! I don't know what it is about hanging baskets but when I buy one, my husband shakes his head and says, "That poor little plant. It doesn't deserve to die." Every time, I swear that this is the one...the one who will live. I'm proven wrong every time. I water often, take off the dead pieces, encourage and love the little plant. And then one day, I look outside to find a dead plant. The fact that I keep buying new plants qualifies me as an optimist, don't you think? Oh, and yes, my next victim is hanging on the deck now awaiting it's cruel fate.
Posted by Steph at 4:49 PM 2 comments:

Mischief is My Business and Business is Good 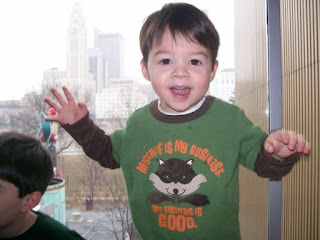 All four of my boys are active and curious boys but Winter3 is in a class by himself. Three year old boys are some of the wildest creatures in the world. Winter3 runs everywhere and I should be skinny since I'm usually running after him (I'm not, but that's another story). He explores every part of his surroundings from the big to the small details. He'll open/close any door or drawer. Poke, push or pull any button or lever. Peek behind and under, jump on and run around any obstacle. Then he'll stop and do a little dance for you. Winter3 is just a fun-loving little guy.

This afternoon, the boys and I brought Spring7 to meet his tutor at the library. Another mom was setting up future appointments with Mr. M. so the boys and I sat down to wait. All of us except Winter3 of course who happened to be telling everyone in a very loud whisper that they had to whisper. He then decided to look for books and was annoyed that he couldn't find any Max and Ruby books in the nonfiction section. After doing a little dance routine, he pulled a book off the shelf, gave it to me and said he wanted to check it out. What was this fascinating book? A teacher's resource for working with ADHD children, of course.
Posted by Steph at 4:09 PM 2 comments: