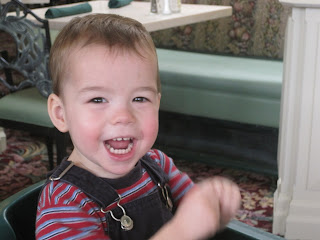 First of all, I have to say that Fall2 is in no way neglected. If he wants something, he points and yells and one of three brothers gets it for him. His brothers adore him no matter what he does and no matter the kind of trouble he causes, Fall2 is still considered "cute". [When Winter4 causes trouble, big brothers generally consider him something far less than "cute".]

Fall2's big brothers tend to be rather overprotective. Fall2 was a very late walker and when he was finally practicing standing, I caught Spring7 sitting him down. I watched a bit more and every time Fall2 tried to stand, Spring7 rushed over and sat him down and said gently, "No, no Fall2. You don't want to get hurt." I told Spring7that his brother needed to get stronger so he could walk. Spring7 looked at me like I was encouraging his baby brother to crawl on the roof..."But Mommy, he could FALL." [Thank goodness, nature is more persistent than big brothers and Fall2 did learn to walk. I had an image in my head of Spring7 hauling him everywhere in a homemade rickshaw.]

To his credit, Fall2 is a remarkably sweet and cute two year old. He's a pack animal and is happiest when his family is all together. Lately, Fall2 has made it clear that he likes his place in the family. He's also become obviously jealous when I pay a lot of attention to his brothers or Mike.

Over Easter weekend, he stooped to a new low. Winter4 hurt his knee so I got down on the floor with him to inspect the damage and dry his tears. I happened to notice Fall2 observing us. He watched for a minute then he pretended to cry and ran to me holding his head saying "bump! bump". I wonder if he'll ever realize that being the fourth child means that while he gets lots of love it also means that Mom isn't going to fall for drama?!
Posted by Steph at 1:07 PM 3 comments:

I have a habit of telling each of my boys, "You're my favorite [insert age] year old boy!" Summer10 is old enough to have figured out that he's my only 10 year old boy so of course, he's my favorite one. He still likes it anyway.

Last week, while I was getting Winter4 ready for bed, I gave him a big hug and told him that he was my favorite 4 year old boy. [I'll admit that I was thinking, "I still love you after all the trouble you've caused today.] I thought we were alone but I later realized that Spring7 had been lurking. Shortly after Winter4 was in bed, Spring7 came up to me and whispered, "Mommy, you should be careful what you say. We know I'm your favorite boy."

I worry about emotionally providing well enough for each of my boys. If I raise each boy thinking that they're my favorite, I'm probably doing okay!

Green Food but It's Not St. Patrick's Day

One of the after school rules in our house which should be so simple to follow is "Put your lunchbox on the kitchen counter." I don't care which counter as long as it gets to the kitchen so I can unpack unused napkins which probably should have been used, wash the plastic utensils, clean out any half eaten bits and refreeze the ice pack. Spring7 inevitably forgets. It isn't usually a big deal...it might slow down my morning a little but it's not something I get upset about.

Until this morning. My boys have been on spring break since April 2. As usual, Spring7's lunch box wasn't in the kitchen. He retrieved it from his backpack and handed it to me. I found a ziplock with something flat and green under his ice pack. What could possibly be flat and green, you ask? SALAMI! Salami that's been in a lunch box for a week and half. I wish I was exaggerating when I say that it was fuzzy and drippy at the same time. What better to find at 8 in the morning before coffee?! Needless to say, I did not find the humor. Needless to say, my boys did.
Posted by Steph at 10:13 PM No comments: