My boys and husband are generally tolerant when I attempt to make our house look like something other than a man cave. I was teased when I bought sticks and rocks as part of a decoration ("those are FREE outside!") but they probably don't even notice much else. I'm in constant battle with shoes in the hallway, socks stuffed under couches, underwear on the floor and snacks everywhere.

I also try to make myself appear less manly than the rest of the house. (I don't own a tiara but haven't ruled out one for daily wear.) Stay at home moms don't usually get to be very fashionable but sometimes something cool catches my eye. Such was the case when Mike and I recently strolled through Macy's. I saw an awesome fake fur vest. I stopped and said just that, "Hey! This is an awesome fake fur vest!" Mike, who usually just agrees with any clothes I like (I think all jeans look like jeans to him and all sweaters look like sweaters) burst out laughing. "Yeah, if you want to look like a Yeti!" Before I could even look at the price and before he could stop laughing, my darling husband was making Wookiee sounds (I didn't know it was spelled like that either!). I then realized that there was no awesome fake fur vest in my future. Sure, I could buy it and wear it but I'd have to listen to Wookiee roars from all five boys in my house. Winter4 would want to wear it for Halloween. Fall3 would pet it and get it all sticky. Spring8 would see it hanging up and think it was a werewolf. Summer11 would tell everyone, "My mom bought a shirt that makes her look like Chewbacca!"

No good could come out of it. Besides, for the price I could probably buy another set of stones and sticks for decorations.
Posted by Steph at 2:20 PM 1 comment:

Perhaps not his best idea 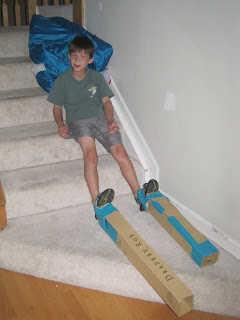 Mike taught Spring8 one of the truths of life that's passed down from father to son, "With duct tape, all things are possible." It's been well established that Spring8 comes up with some fantastic ideas. Often these ideas aren't able to be executed the way he imagines (even with duct tape!) and he gets very frustrated. Successes include duct taping a flashlight to a remote controlled truck so it can be played with at night. Failures include attempting to create a pulley system so that he and Summer11 could pass things up and down between their bunk beds. After that particular failure, he yelled and stomped out of his room. I found a huge tangle of duct tape, string and a couple of shoe boxes. No wonder he was frustrated. He probably got wrapped up in that mess at some point.

Recently, Spring8 came up with the fantastic idea of making stilts. I know, I know...STILTS? My parents were visiting and I'm fairly certain my father imagined a body cast in the near future. I worry, but not that much, so I imagined only an arm cast. As you can see in the picture, the stilts had a couple of fatal flaws. First, cardboard curtain rod boxes may look like stilts but they aren't all that strong. The bigger problem was the difference in length. After one try, Spring8 decided to add more duct tape because surely that would solve these problems. The stilts worked well enough to get a test run around our family room. He held on to me and we walked (lurchingly) in a circle and laughed. Well, I laughed; he was frustrated because the stilts didn't enable him to walk like someone in the circus.

I couldn't be happier that Spring8 has the imagination and determination to attempt all these crazy ideas. Most new things started out as crazy ideas (perhaps involving less duct tape.)
Posted by Steph at 11:01 AM No comments: