It's a Cape not a Cake, of course

Winter3 is a fan of the Wonder Pets. If you haven't seen the show, the Wonder Pets are a group of animal friends including a guinea pig, a turtle and a ducking who are regular classroom animals by day and superheroes by night. Naturally, (well duh) the Wonder Pets have capes. Winter3 was constantly finding cape-ish sorts of things and having me stick them in his shirt so he could perform animal rescues. I decided that this little boy needed a real cape. I'm no seamstress but few can beat me when I'm armed with a bottle of fabric glue and a good pair of scissors.

I more or less drew out a sketch, figured out what we needed to buy and broke the exciting news to Winter3 who was thrilled. My only concern was that he told everyone in the fabric store and even my mom on the phone "Mommy's making me a cake! A Wonder Pet cake!" Hmmm. When I'd correct the cape/cake mix-up he'd say "a cape!" like he'd been saying that all along.

At naptime, I whipped out scissors and glue and went to work all the while saying a little prayer that he would be happy to see a cape and not a cake. This is the final product and he was thrilled. 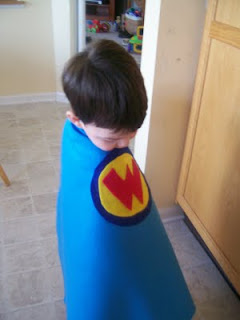 The Wonder Pets have a letter W on the back of their capes. I suggested a different letter to Winter3 and he looked at me like I was a lunatic. Here, he's inspecting my work. 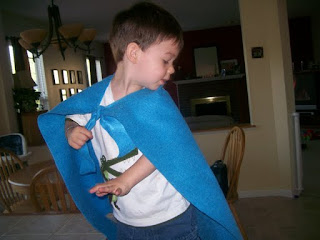 With cape flying behind him, Winter3 is off to rescue his brother or rescue someone/something from his brother. 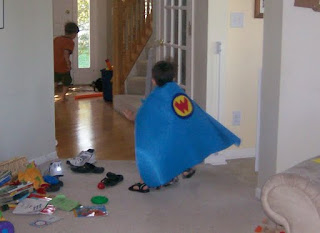 He's played with the cape so much it's pilling and probably starting to smell but truth be told, if he really, really wanted a Wonder Pet cake, I'd make him one of those too.
Posted by Steph at 12:09 AM